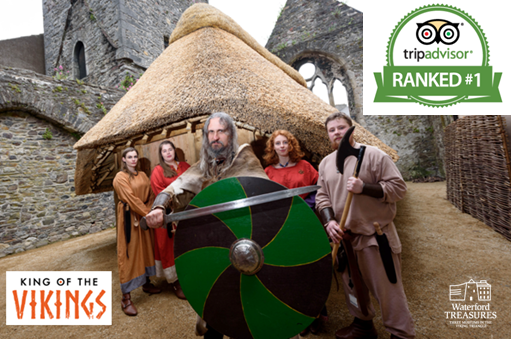 Three very different museums all within a few paces of each other tell the 1100 year old story of Waterford, from its foundation in 914 by Viking sea pirates, to the late 20th century – welcome to Waterford Treasures – Three Museums in the Viking Triangle!

There are also three museums within the Viking Triangle; Treasures of Viking Waterford in Reginald's Tower, built in 1190AD, Treasures of Medieval Waterford, in the Medieval Museum which dates back to 1270AD and Treasures of Georgian Waterford, in the Bishop's Palace dating back to 1743AD, which now includes the new 4D Masterpieces in Glass exhibition, the story of glass making in Waterford from the 1700's to modern day. Guided tours are available for each museum

Waterford Treasures also hosts the ‘King of the Vikings’ experience, first of its kind in the world. This 3D Virtual Reality Viking adventure takes place in a reconstructed Viking house and seamlessly blends cutting edge technology with ancient Viking house building techniques. Each experience lasts 30 minutes and since there are only spaces for 10 people, booking is highly recommended. The ‘King of Vikings’ experience is available in English, French and German.

Send us a message >